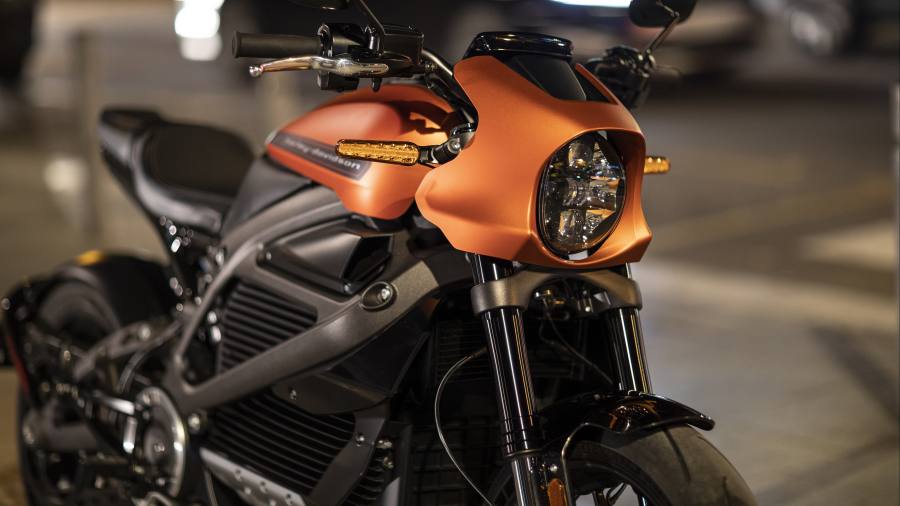 Sign up for myFT Daily Digest to be the first to know about electric vehicle news.

Having owned and driven gasoline two-wheelers since I was six years old – and with a collection of 15 of them currently stuck in my garage – I can’t say I look forward to the day the melodious bark of my Ducati V-Twin exhausts could be considered such an anachronism that I would be ashamed to ride them. I also don’t look forward to the possibility of not being able to jump on my BMW and drive across Europe without worrying about where to “plug in” en route.

Yet this day is coming, and quickly. In the UK, the government ban on the sale of new petrol and diesel cars will come by the end of this decade. For motorcyclists, a date of 2035 has been proposed as the end point for the sale of all new non-zero emission vehicles. No matter how longing I am for the sights, sounds, smells and thrills of the “dinosaur” bikes that I adored, I know now is the time to get on board.

The good news is that the electric motorcycles I have ridden have all been pretty good, and they will only get better. So far, young specialist manufacturers have led the way. After 12 years in the company, California-based Zero is considered the industry leader in high-performance electric motorcycles, offering the widest range of machines as well as the fastest. Its SR / F can hit 124 mph, but starts at a realistic price of £ 18,990. Fuell, meanwhile, is the brainchild of former motorcycle rider Erik Buell and will soon launch a model called Fllow that promises ‘superbike acceleration’ for € 11,995 (£ 10,200).

The only electric superbike from a widely recognized brand to go into production is Harley-Davidson’s LiveWire, released two years ago. I spent a week with the LiveWire back then and while its top speed was only 110mph the way it got there was certainly exciting for the superbike. Thanks to the instant traction of the electric motor, it goes from zero to 60 mph in three seconds. A visceral, sci-fi whine from the gear train made up for the absence of the famous Harley-Davidson exhaust note, and the bike handled superbly despite its weight.

Still, sales would have been sluggish. There are two main reasons for this: a hefty price tag of almost £ 30,000 and a limited range of just 110 miles on a full charge (if you’re careful). This means that the LiveWire has so far been an expensive, short-haul toy for the well-heeled and environmentally conscious bikers or a secondary machine for more committed motorcyclists who also have a gasoline-powered bike for long trips and short trips. tours. The company sought to solve the problem by making LiveWire a standalone sub-brand and creating what it calls LiveWire One. Now on sale in the United States, it costs around $ 8,000 less than the original bike and also has an improved range of 146 miles around town.

Harley-Davidson CEO Jochen Zeitz refuses to reveal LiveWire sales figures, claiming only that it is “the number one selling model in its class.” He admits, however, that “bringing the price to a more competitive level” was intended to boost sales and that LiveWire One should be available in Europe next year at an equally reduced cost. “We must not forget that we are innovating with this bike,” says Zeitz. “Personally, I don’t think range is a problem, but a lot of people are still worried that they won’t be able to go 300 miles non-stop.”

However, potential competition for LiveWire finally emerged earlier this year. British marque Triumph has unveiled the powertrain and performance figures offered for its Project TE-1 electric superbike prototype, along with design drawings showing what it should look like. At first glance, it looks good enough to tempt even a die-hard combustion engine fan like me to step aboard, especially since it should only take 40 minutes to recharge when empty.

Triumph is halfway through a four-step development program in collaboration with Formula 1 specialist Williams Advanced Engineering and electrification experts at the University of Warwick. The aim is to create a viable, aesthetic and efficient machine that will represent a practical proposition for cyclists attached to conventional sports bikes. But are bikers in general persuaded?

There are more, it seems, but the change is gradual. According to figures compiled by the Motorcycle Industry Association (MCIA), 633 electric motorcycles were registered in the UK in June, up from 248 in the same month last year. And while MCIA chief executive Tony Campbell warns of like-for-like comparisons due to pandemic lockdowns last year, electric motorcycles and scooters are undoubtedly spreading. They now represent 5-6% of the total UK market and, according to Campbell, the increase in sales is expected to remain exponential.

Still, he believes more work needs to be done to convert diehard bikers to electricity. “What’s going to be really interesting, though, is seeing how manufacturers start to innovate. Who knows, maybe battery power won’t be the only answer to emission-free driving? hydrogen and biofuels could be the key to greater autonomy and better performance. ”

Aside from Harley-Davidson, BMW, whose C Evolution scooter went into production in 2014, is almost the only major motorcycle manufacturer to have made a serious breakthrough in the electric two-wheeler market. This model has now been ditched before the arrival of the decidedly radical CE 04, which goes on sale early next year for £ 11,700 (minus the UK’s 20% plug-in grant, capped at £ 1,500).

The first machine in what BMW calls its ‘silent revolution’ for electric-powered urban two-wheelers, the CE 04 offers futuristic looks complemented by a matching driving jacket that glows in the dark – if pedestrians can’t hear you. come, at least they could see you. (Although the synthesized sound, already developed for some electric cars, is likely to be widely adopted for two-wheelers and is already a feature of machines equipped with artificial intelligence produced by the Indian brand Revolt.)

Guy Salens, the Belgian founder of the site specializing in electric motorcycles and scooters The Pack, welcomes the innovation. “The fact that the design is so different from other scooters is really commendable. The criticism I often see and hear in the media is that electric motorcycles still look too much like traditional motorcycles. The technical requirements are completely different and car designers have new challenges, something BMW has understood.

Salens hopes the “big four” manufacturers – Honda, Yamaha, Kawasaki and Suzuki – will join the party with full production electric motorcycles as soon as possible. “Who knows what they have developed in their R&D departments? But electric motorcycles clearly have a very long road ahead. “The future… Is going to be extremely exciting,” he said.