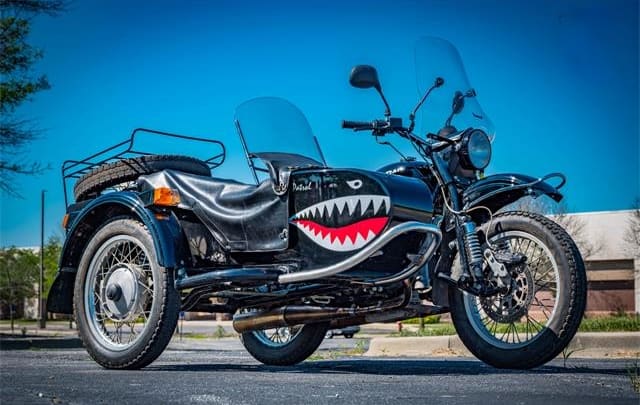 The Pick of the Day is a modern motorcycle with a military history and comes with a custom sidecar. This is a 2010 single owner IMZ-Ural Patrol motorcycle with sidecar produced in Russia.

IMZ is the abbreviation of Irbitskiy Mototsikletniy Zavod, which in Russian means Irbit Motorcycle Factory, which traces its history to 1940 and the conflict of World War II when the Soviet Union needed to mobilize its ground forces to defend against the Nazi invasion.

One of the means of mobilizing was the motorbike. According to history, the Soviet Army acquired five BMW R71 motorcycles through contacts in Sweden and reverse engineered them to produce the prototypes of the Dnepr M-72 motorcycles and sidecars.

To produce thousands of these machines, a factory was established in Irbit, in the Ural Mountains, at the western end of Siberia.

After the war, the production of rugged motorcycles continued, with sales to civilians and with exports to various world markets where such machines were needed for traveling over rough terrain. Sales reached millions.

Pick of the day is an example from 2010 advertised on ClassicCars.com by a dealership in St. Louis, Missouri.

“Once the workhorse of Communist Russia, the rugged Urals sidecar has grown from an agricultural device to a horse of choice for many recreational cyclists! dealer reports.

“This Ural is a sole proprietorship, bought in 2010 and equipped with a very reliable 2 cylinder engine, with less than 10,000 miles in total. A pleasure to ride solo or to share the experience and pleasure with a companion by leaving it lying around in the sidecar accessory, to which a seat belt has been added.

The dealer notes that the bike has several options, including heated grips, knee pads, a windshield, an extra fuel can, a deeper engine oil pan, and an ammo box for tools.

IMZ-Ural keep working with an American base in Redmond, Washington, and with new motorcycles priced up to $ 23,899. This vintage model is offered for $ 9,000.

To view this list on ClassicCars.com, see Today’s Pick.