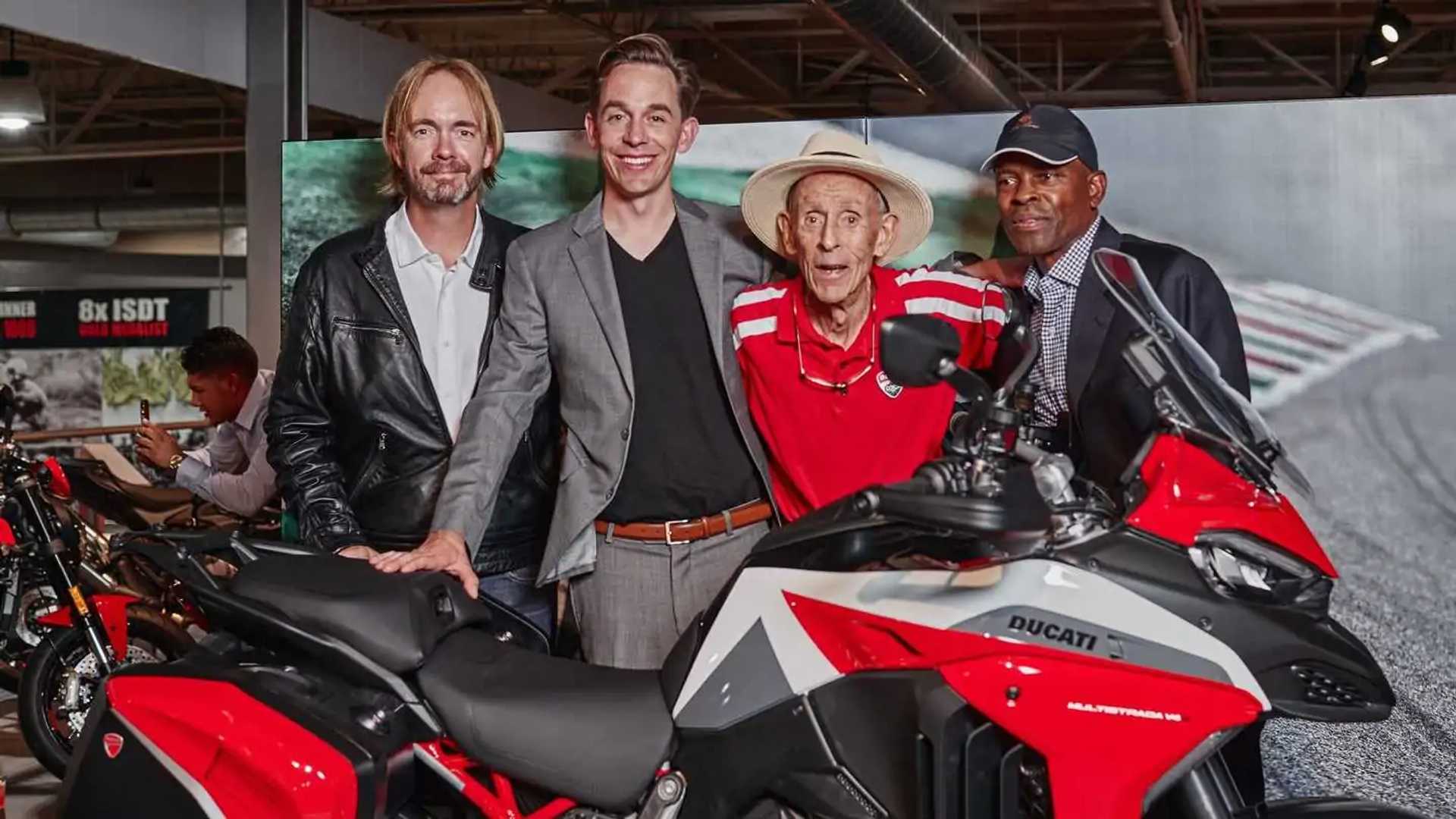 Malcolm Smith is one of the greatest offroad racers of all time. In addition to having captivated the public in the flagship documentary on the motorcycle Any Sunday, he won eight ISDE gold medals, ten Baja 1000/400 titles (bikes and buggies) and two Mint 400 victories. Despite all this racing success, Smith kept his day job as owner and operator of Malcolm Smith Motorsports (MSM) in Riverside, California.

While the showroom seems to go on forever, MSM has no problem filling the cavernous space with the latest equipment, clothing, and row after row of premium motorcycle brands. The upstairs loft, however, is reserved for Smith’s extensive collection of vintage off-road motorcycles and winning enduros. Adjacent to the mini-museum, Ducati’s new ultramodern showroom further enhances the MSM offering.

To celebrate the new Space and Service Center, the best Ducati executives in North America, Malcolm Smith Motorsports teams and loyal Ducatisti gathered for the groundbreaking ceremony on September 10, 2021. To the delight of all, the man himself, Malcolm Smith, was also present presence for the historic occasion.

“This new partnership with Malcolm Smith Motorsports is the result of many years of evaluation and a common goal that when we do it, we do it right,” said Jason Chinnock, CEO of Ducati North America. “The demand for Ducati products has never been higher, and we believe this place will be a welcoming home for loyal Ducatisti and customers entirely new to the Ducati brand. “

Showcasing the full power of the Bologna marque, the new showroom showcased the latest models from Ducati, including the all-new Monster 2021 and Multistrada V4. From Diavel to Panigale V4 and everything in between, MSM’s Ducati fleet will appeal to brand loyalists as well as brand converts. In addition to the groundbreaking ceremony, the dealership presented a Multistrada V4 S Sport purchased by long-time Malcolm Smith Motorsports and Ducati customer Mark Michell.

After the celebrations, we met Jason Chinnock, CEO of Ducati North America, in the dedicated Ducati Scrambler exhibit to discuss the new partnership. Given the brand’s recent success at the Mint 400 and the resulting Desert Sled Fasthouse model, the collaboration with Malcolm Smith Motorsports makes more sense than ever. While Ducati doesn’t put the emphasis on dirt-worthy models like the Multistrada or the Desert Sled, the brand’s North American branch has never shied away from pushing the boundaries.

“As long as we hold the soul, the spirit of the brand, we can stretch it out and stay authentic,” Chinnock explained.

Two of those projects include a Hypermotard 1100 raced in the 2008 Pikes Peak International Hill Climb and a Scrambler Desert Sled in the 2019 Mint 400. Malcolm’s son and MSM general manager Alex Smith proudly rode the two Dukes in competition. . Both machines were also on display at the event, illustrating the long-standing relationship between the two brands.

“Malcolm Smith Motorsports is known the world over for his passion for motorcycles, it is a defining part of our family heritage,” admitted Alexander Smith. look forward to a bright future by representing Ducati’s expanding product line.