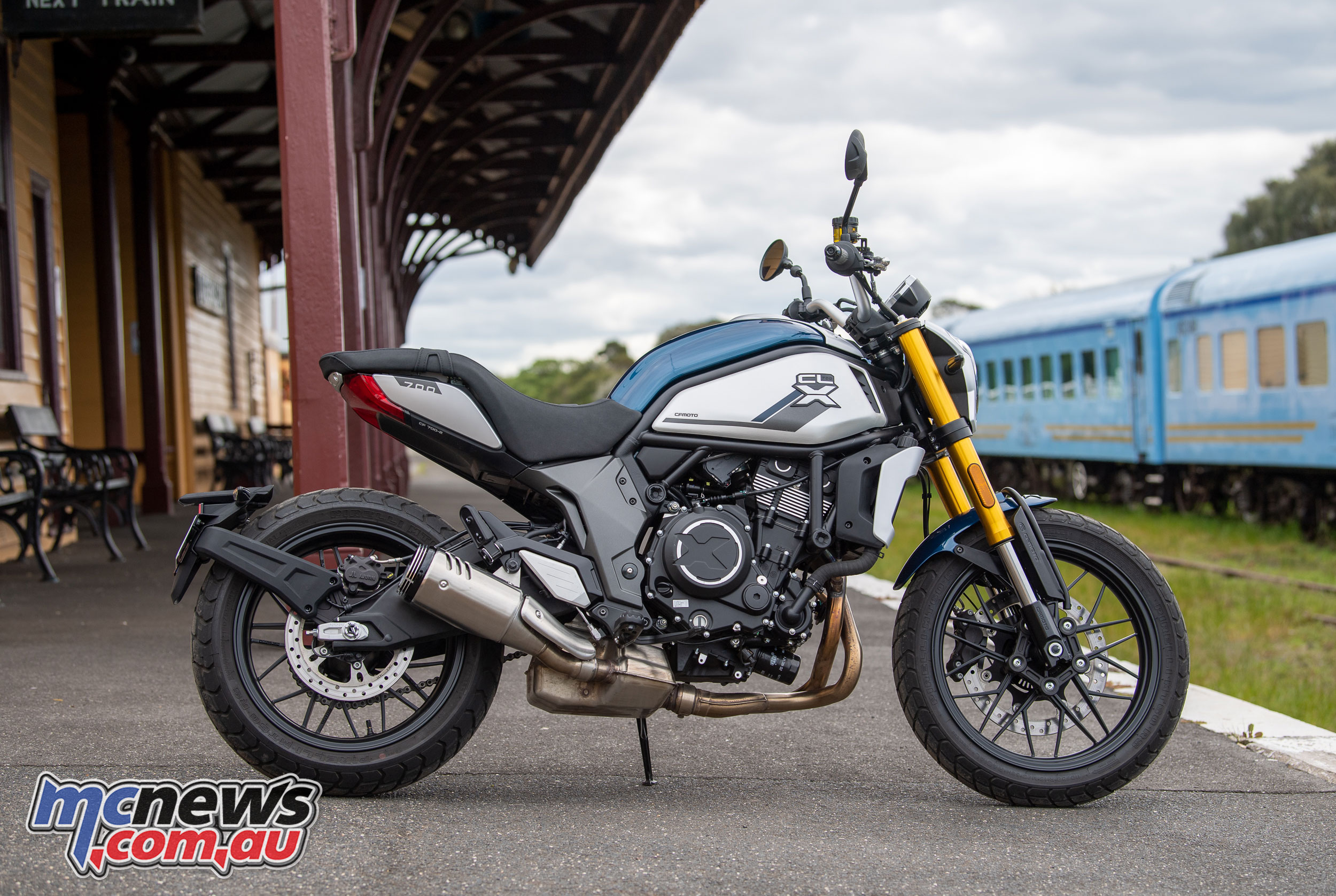 This is the third CFMOTO that I have tested in recent times and I will say right away that the CFMoto 700CL-X Heritage is the best of them so far. For starters, it’s not a LAMS bike, so it has significantly more poke.

However, that aside, I think the build quality and design is an overall improvement as well. It is not far from being a really good thing. Not just good for the price, but good.

but what is it exactly? Well, they’ve focused the 700CL-X on the ‘classic’ retro naked segment with the brand’s first full-powered bike and one they describe as a watershed moment. It is the product of their new R&D office and production facilities. I think it shows.

The design has some very well executed elements and overall it reminds me a bit of Indian FTR which is not a bad thing. It just tones the butch up a bit compared to the FTR and aims things further down the road even though it arrives with fat tracked tires for a bit of that scrambler look.

The materials overall look well finished. Nothing appears to have been built at a cost, although it clearly is. Pretty aluminum panels, a beautiful leather seat, well-resolved touches everywhere. The more you look, the more you see. Are these braided lines? Why yes. Yes they are. Sounds pretty cunning!

This 693cc engine is a lot sharper mass than the LAMS 650 donkeys. It throws just under 75 ponies and 70Nm of torque and does so lively. It has a meaty exhaust note from that chunky little box; and a surprisingly rorty admission rating.

Get up and the bike rumbles under you. And it turns out well too. Peak power reaches about eight and a half thousand. Unlike the 650s, the mode button on this jigger transforms the engine. Eco mode cuts power by a decent margin and has a super smooth throttle feel. To be fair, it looks more like a wet card. Very soft.

Since the bike has no traction control, you can easily use it as a wet card if you feel like it. New cyclists would likely see this as an advantage.

Put it in Sport mode and it comes to life. It’s day and night. Apparently it’s just the timing and fuel that changes, but it looks like a whole different engine.

In old-school terms, it feels like another throttle is opening or another injector coming online when you give the throttle a decent twist – there’s a noticeable kick. when he answers. It’s similar to the starting feel of the VTEC. It’s great fun on the road!

Refueling isn’t perfect in Sport mode though – I found it a bit rickety at the bottom. Nothing that breaks business, he certainly has a character that I like. But it could be improved. So much so that I couldn’t help but wonder how good the bike could be with maybe a Power Commander… It could also make it a better roller bike.

I didn’t feel totally comfortable on the rear wheel with the feed as it was and struggled to find the balance point.

Speaking of which, it’s a fairly comfortable seat, my buttometer was happy for solid stretches over 60 minutes, but started looking for rest after several hours on the day of the photoshoot. I don’t think that’s the seat, although that’s the problem.

I think the KYB rear suspension is maybe a bit underused in terms of rebound control. I didn’t notice it at first, but certainly after a great day on the bike it showed. It’s just a little harsh.

Nothing prevents most people from getting in, as most people probably won’t spend four or five hours getting in and out of the saddle in one pass. Either way, you will also go down to refuel. This 13L tank won’t take you over 250 km, which gives you an idea of ​​how they think people will use it. And I don’t think that range is a problem, especially for this bike. Standard cruise control helps you keep your license intact when driving on the highway.

As for the brakes, I originally thought it should have a pair of discs up front when I first boarded it, but the only J.Juan unit works and didn’t show any signs. of problem. If I were to charge hard often this might be something to consider. But then… it has a sibling model called the 700CL-X Sport and it has twin discs, so if that’s your thing, go for that one. Continental supplies the ABS smarts.

In terms of handling, it drives pretty well. These tires have a fairly high profile so they rock impatiently and are compound and stable throughout the turn, they are also nice and light when changing direction. No problems there. I was starting to really enjoy the repeated passages of a curvy section for photos. If only the cars had made fun of me, I could have really had fun …

People would be doing themselves a disservice to look past this bike. And a Power Commander or something with a decent tuner could make it even better, I’m sure. Overall I give it two thumbs up.

The future looks bright for CFMOTO I think. I wonder how much the 800MT will accumulate …

I would prefer the CFMOTO 700CL-X Heritage if:

For more information on the all new 700CL-X variants, visit www.cfmoto.com.au or contact your local CFMOTO dealer.