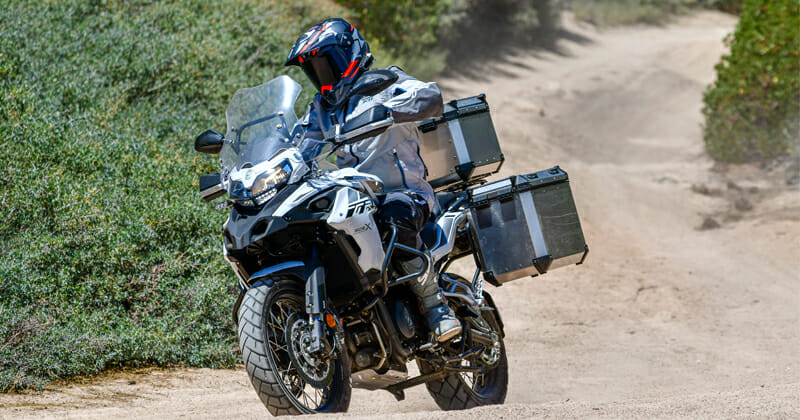 With its Italian heritage and attractive price, the Benelli TRK 502 X adventure has our full attention.

Benelli is an Italian motorcycle company that continues to operate. It is one of the oldest Italian motorcycle brands still in operation and has certainly seen its fair share of ups and downs throughout its 110-year history. Today, Benelli is owned by the Chinese company Qianjiang Motor Group, which acquired the brand in 2005. As a result of this transaction, Benelli motorcycles are now made in China but still designed in Italy, so in theory you get the best of both worlds: Italian engineering without the sticker shock. Benelli is now distributed in the United States by SSR Motorsports in Southern California.

One of the latest Benelli motorcycles to roll off the production line is the Benelli TRK 502 X, a mid-size adventure motorcycle that sells for $ 6,399. The TRK 502 has been around for a few years now, but this is the first time it has made its way onto American soil. The TRK 502 comes in two versions: the standard TRK 502 and the more dirt-oriented TRK 502 X, which we piloted here. Compared to the standard, the X has metal spoked wheels, a 19-inch (up from 17-inch) front wheel, longer suspension travel at both ends, dirt-flavored Metzeler Tourance tires. and an additional central stand to accompany the side stand. You get all of these things for just $ 400 more than the standard model. For an additional $ 1000 you can accessorize your TRK 502 with the Benelli side panniers and aluminum top case (brackets included), which were fitted to our bike.

The Standard and X both come with crash bars to help protect the bike’s pretty, wrap-around plastic handguards to protect your joints. There is also a small windshield and a substantial fairing mounted on the frame.

Both bikes also come with a generous 5.3 gallon fuel tank, ‘switchable’ (but not on the fly) ABS, semi-adjustable suspension, with massive front fork tubes of 55 mm.

The 502 is powered by Benelli’s Chinese-designed fuel-injected DOHC parallel-twin engine, with a two-into-one exhaust system and six-speed transmission.

We immediately feel the weight of the Benelli. It takes a lot of oomph to get it off the side stand, but once you’re there, the relatively low 33.1-inch seat height makes it easy to maintain. The Benelli is also a big motorcycle; at least it’s like that – it’s a lot bigger than your typical 500cc motorcycle, but at least it’s comfortable. It has a good sitting position with plenty of space, and the seat itself is soft / firm with a nice outline. The footrests have removable rubber inserts which we left in place.

The dashboard is modern in appearance and there are few buttons and switches to fumble with as the Benelli has no driving assistance (apart from ABS); you get on it and go.

The first thing that catches your eye is the softness of the Benelli. The vibrations are almost nonexistent, even at high revs, and the driving is pleasant. The suspension is well suited to the road, and the massive fork gives the Benelli a feeling of security, solidity and security while being stuck in the corners. The bike is also very stable at low and high speeds, and it takes little coaxing to get it to do what you want it to do when it comes to maneuvering. It’s very responsive to rider input, quickly making you forget how heavy it is, especially for a 500cc motorcycle only.

The Benelli is not fast, but I wouldn’t call it slow either. Maximum torque is reached at 6,000 rpm, with maximum power reaching 8,500 rpm, according to Benelli statistics. At 70 mph in sixth gear, you’ll see around 6,000 rpm on the tachometer with, again, a few vibrations creeping up your extremities and little wind hitting you in the chest through a well-designed windshield ( which is, by the way, not adjustable). The fueling is perfect and the gear ratios seem to work in harmony with the engine. The gear change is effortless and the clutch pull is quite light with a good feel. It’s a surprisingly good engine, which surprised me.

Unfortunately (well, at least for some people), the Benelli is not a dirt bike. Despite its good ADV / dirt bike appearance, nothing more than a well-maintained dirt track is a grip on the Benelli. The Benelli shows its size and weight on the dirt, and the suspension isn’t up to any noticeable bumps or ruts in the road, which you don’t want to ride at high speeds. However, on a perfectly groomed dirt road, go ahead; the Benelli is fine, thanks to the bike’s smooth and predictable power delivery and decent off-road tires. The key to having fun in the dirt on the Benelli is not to be in a rush. Instead, take your time and enjoy the scenery.

The large side bags and top case hold a ton of stuff, which is handy, but they’re bulky and easily scratched. The latches are easy to use but require a second ignition key.

For those who want to buy a motorcycle made in China, all I can say is that the Benelli looks well built. It doesn’t feel like it’s made in China. From the outside, the fit and finish seem to rival most other more expensive motorcycles from Japan and Europe, and we didn’t notice any unusual noise or wear during our short time on the bike. Nothing broke or fell out either. Long-term reliability is a bit of a mystery, of course, but so far so good with our test bike, which has over 700 miles on the clock.

So what would we compare the Benelli TRK 502 X to? It’s hard to say. Price wise, the Benelli sells for a few hundred dollars more than Kawasaki’s Versys 300 ABS, KTM’s 390 Adventure and BMW’s 310GS. In terms of displacement, you can compare it to Suzuki’s V-Strom 650, Kawasaki’s Versys 650, or Honda’s CB500X, which are considerably more expensive (around $ 600 to $ 2,400) than the Benelli. You can also include in the mix the new Kawasaki KLR650, which starts at $ 6,699 and is a much better off-roader. As you can see, the Benelli sits somewhere in the middle.

On its own, however, the Benelli is a surprisingly good motorcycle – for the street – however, it can handle some light (and we mean light all-terrain). For the money, you get a lot for your $ 6,399. It’s a very comfortable motorcycle that runs well on the streets, is apparently well built and, hey, looks quite Italian. And the icing on the cake is the name Benelli on the tank. CN