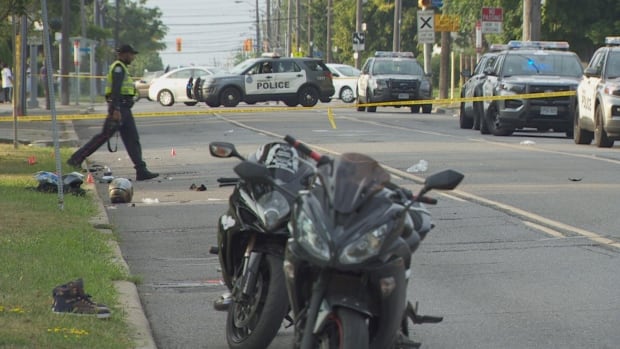 A 39-year-old man died in an accident in Toronto on Sunday afternoon.

Toronto Police responded to a serious collision call on Caledonia Road near Glengrove Avenue at approximately 3:34 pm Officers arrived to find that a motorcyclist had struck a white Toyota.

“A group of three motorcycles were traveling southbound on Caledonia,” said Insp. Michael Williams told reporters at the scene. “A white Toyota was driving north on Caledonia.”

Williams explained that the white Toyota took a left turn, at which point one of the motorcyclists crashed into the car, forcing him to be thrown from the motorcycle.

One of the bikers crashed, and when the person was located, the biker was unresponsive, police said. Paramedics declared the biker dead at the scene.

Toronto Police Collision Reconstruction Officers are investigating the incident. The driver of the white Toyota was not injured and remained at the scene to assist police with the investigation.

The investigation will involve “several factors,” Williams said, including the speed at which the vehicles were traveling.

Caledonia Road is temporarily closed while officers investigate. Drivers are urged to consider alternative routes in the area.